It seems fitting that trolls would be mixed up in some pretty crazy stuff, especially considering the recent antics of Vol’jin and the Darkspear tribe. Wah wah, we don’t like Garrosh! He’s a big meanie!

But I digress. Remember when times were simpler? When it was our duty to hone our abilities, learn to defend ourselves, and protect the realm? In those days, my mission was pretty straightforward: sharpen my blade on beasties, show no mercy, and don’t come back unless I’m bleeding. With that in mind, as a young lad I traveled to Zul’Farrak to face what was then considered a “fearsome” demigod: Gahz’rilla. Whatcha think of my electrified scale cloak?!

Oh, how things have changed. Now we’re all caught up in the mess being made by the current “warchief.” I put “warchief” in quotes there because—let’s be honest—he’s little more than an egomaniacal bully out to sate his bloodlust and spread his warmongering way to the rest of us until we all die a horrible, sha-riddled death as Azeroth implodes upon itself.

So here we are, charged with defending the realm once again, and preparing to ensure we can stop whatever nonsense Garrosh is up to before it’s too late. This means we need to face off against the Kor’kron Guard while we help the trolls. Yippee!

For you tamers, the reward is grand, and should remind you of the Zul’Farrak-in’ days of yore. It’s a shame you don’t have three heads, Crithto! 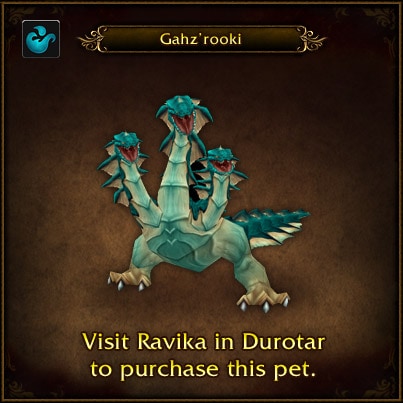 Crithto: Guttural muttering from deep within your three throats will only get you so far, but Gahz’rooki is so much more than just a mini-hydra with an attitude. A triple play of Whirlpool, followed by Tail Slap, and finishing with Swallow You Whole should give you the edge against most of your opponents. If you’re into guarantees, you can take comfort in 100%-chance-to-hit moves like Geyser and Devour. Either way, you’ll become a demigod of Pet Battles with this little Aquatic fellow on your team!

Not much left to say, so GRAB YOUR MALLETS AND HEAD OUT TO DUROTAR!

Come join the discussion about this pet in our Pet Battles forum. You can also learn more about Gahz'rooki by visiting WarcraftPets.com.

New World of Warcraft Comic
Last but not least, we've added a new community comic to our gallery submitted by Azurah (Servants of None).

The Blizzard Comic Contest Is Here
We’re looking for original comics focused on the Warcraft, Diablo, or StarCraft universes... and we want you to create them. Each month, we'll review your submissions and select one winning comic to receive a prize. We’ll also choose several honorable mentions; winning entries and honorable mentions will be displayed on our comic pages for all the universe to enjoy. You can learn more details about the prizes, read the complete official rules, and submit your comics here.

Be sure to give a shout-out to your favorite pieces in the comments below.

Soar into battle atop the undisputed ruler of the night skies—the all-new Armored Bloodwing mount. This monstrous, flesh-eating bat is the perfect companion for trips that call for death and destruction. Once purchased from the Blizzard Store, the mount will be available to all present and future characters on a single Battle.net® account.

A new thread has been created in the Updates section of the official forums:

[dev1146] Visual Effects for Closing and Opening Windows
[dev1147] Various Effect Area Recognition Adjustments
[dev1148] Geomancy Special Effects Adjustments
Buckle up and prepare for liftoff, as the test server has been updated with the latest changes coming to Vana'diel!

We would like to humbly ask for your feedback on the various adjustments that are scheduled for the next live patch.

A new channel has been created on YouTube Live.

It is our pleasure to announce the URL for the upcoming Letter from the Producer LIVE Part VII.

Check out the details on how to view the broadcast.