Are you ready to take an epic visual journey? If so, then you'll want to pick up World of Warcraft: The Ultimate Visual Guide, now on sale! 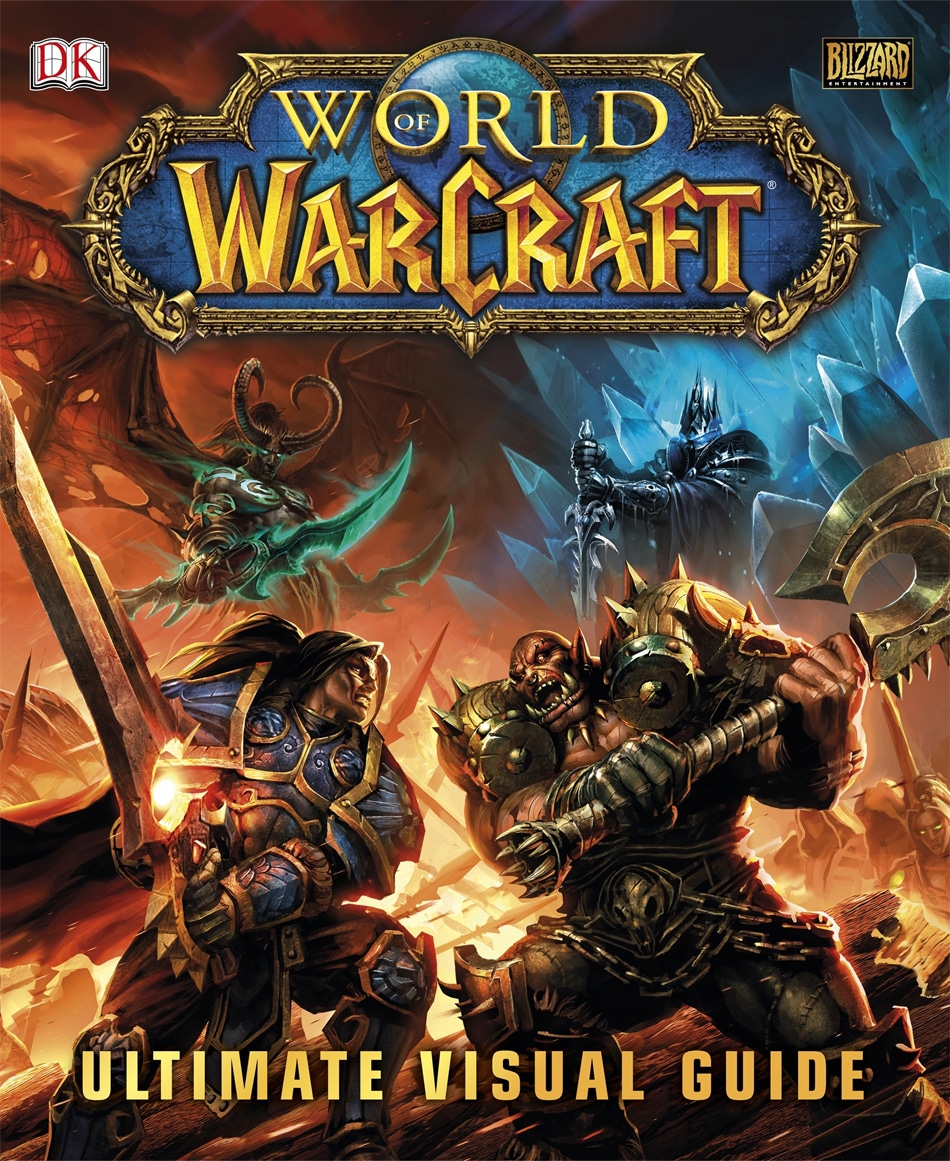 Readers will be treated to a visual journey through the game’s world, including its in-depth history, the back stories of heroes and villains, fascinating facts about key locations, and a behind-the-scenes look at their development here at Blizzard. If you think you know it all, or if you just want to learn more about World of Warcraft, its history, and creation, this is the book for you!

Check out a preview on the DK site, and then head over to Amazon or Barnes and Noble to purchase your copy.

We're giving away all three Abyssea battle area expansions, along with a few key items to help with your adventures there...but the end is nigh! Hurry and procure your present before it's too late!

Read on for more tantalizing tidbits about this giveaway.

The story goes that Stone Cold Trixxy contacted me a few days ago looking for help with her team’s strategy. Of course, who else would a Master Tamer contact? Yours truly, that’s who! Earlier that day, Historian Llore had tasked me with researching the temporal anomolies that are occuring on the Timeless Isle, so I happened to be in Stormwind at the time she contacted me. Given that The Bravery was docked right there, I decided I’d leave a day early and set sail for Rut’theran Village on Teldrassil so I could finally see the night elf city of Darnassus. I had never been there before, so I was pretty amped up to walk through and be gazed upon by its astonished denizens.

I took the portal into the city and was immediately taken aback by its beauty. Not just because it was so lush and impressive in size, but because I’d finally found a place worthy of my own illustrious presence. Where’s my red carpet?! Immediately, I headed over to the Temple of the Moon, paid my respects to Tyrande Whisperwind, played Malfurion Stormrage in some new card game where he clearly cheated, and then walked over to the Cenarion Enclave. There I got to wrestle with a Stormsaber, climb a couple trees with one arm—and then that’s when it happened. As I was rounding the area, checking out the sights, I happened upon a giant tree the locals called an Ancient Protector. He and I sat amidst the leaves and chatted about life, philosophy, and his duties as a primeval guardian of the night elves.

What an experience! Rarely does someone or something impress me more than my own reflection, but I gotta say, Ancients are wondrous creatures who deserve a sturdy salute. The wisdom he imparted me I’ll cherish for the rest of my life. No, I’m not tellin’ you what he said! Needless to say, I finally made it to Winterspring the next day, where I met up with Trixxy. Grrr, what a mess!! Gimme a second to take a few breaths . . . Crithto’s got something he wants to share with you anyway. 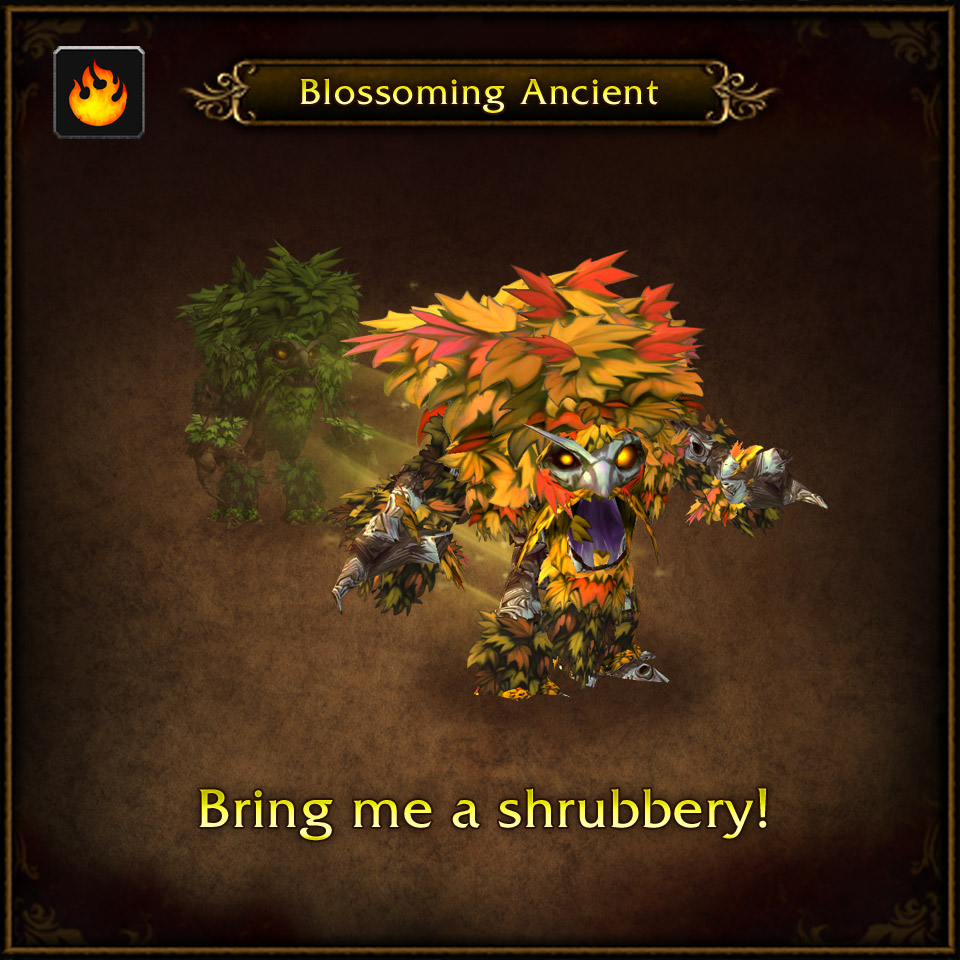 Crithto: Ancients are impressive, natural creatures who beckon your respect with their mere presence. And thanks to the ingenuity of the Cenarion Circle, you can own one as your very own pet. The Blossoming Ancient is an elemental companion that can level the battlefield with its versatility and power. Abilities like Sunlight and Photosynthesis can give your team a natural advantage, while Stun Seed, Ironbark, and Autumn Breeze make for a incredibly protective combination. Even more fascinating than their resilience in battle is the unique ability to change their appearance with the seasons. And if I’m not mistaken, it’s autumn in Azeroth, and each Blossoming Ancient now reflects this time of year with its falling foliage.

I hereby give you tamers my solemn permission to continue to school Stone Sold Trixxy in the ways of Pet Battles. You may still be a bit squishy and soft, but believe me, she’s got a lot to learn and I’m confident enough in my training that you can show her the err in her ways. Don’t let it go to your heads, though! NEXT WEEK YOU’RE THE ONE GETTIN’ SCHOOLED!

Come join the discussion about this pet in our Pet Battles forum. You can also learn more about the Blossoming Ancient by visiting WarcraftPets.com.

We'd like to thank everyone who submitted entries in the BlizzCon 2013 Talent Contest. A panel of Blizzard judges recently completed the first stage of selection for the first-ever BlizzCon Talent Contest. They agonized over the amazing entries we received, and—after much deliberation—chose three of the four Grand Finalists, who will be revealed at BlizzCon in November.

Now it’s your turn to weigh in! Blizzard gamers from all over the world will have the opportunity to watch five contestant videos, and then vote in a poll for the act that most deserves the opportunity to be recognized at BlizzCon 2013. The act that is chosen will be our fourth and last Grand Finalist, and could wind up on stage at BlizzCon to compete for a top prize of $4,500.

To participate, just watch all five two-minute videos, then vote for your choice in the poll below. The Community’s Choice Poll closes on October 4, so cast your vote today!

Without further ado, here are the contestants:

Wrath of the Piano Queen

Why Do Leaves Fall

Thank you for your vote, and we hope to see you at the show!

Just in time to celebrate the Anniversary of World of Warcraft: Mists of Pandaria Facebook fans will be able to score great items on the SteelSeries page beginning September 25 through October 9. Make sure to visit their page for more information.

The time has come to put your World of Warcraft knowledge to the ultimate test. You and your friends will be able to tackle 600 questions across 6 categories including: Geography, Player Characters, Lore, Loot, Villains, and Encounters. You’ll also be able to use special hand-crafted Murloc dice and cute sculpted baby Murloc movers in 6 whimsical colors to play in true Warcraft style.

Buy it now on the Blizzard Store, Amazon.com, and at other fine retailers.

Attention, citizens of Vana'diel! The time to claim your prizes from the Mog Bonanza that began on Tuesday, July 16 is about to come to a close.

Winning numbers may be confirmed and prizes received at any of the Bonanza Moogles located in the areas given below. Make sure you exchange your bonanza marbles before time runs out!
Port San d'Oria (I-9) / Port Bastok (L-8) / Port Windurst (F-6) / Chocobo Circuit (H-8)

* Bonanza Kupons and the respective items that they may be traded in for may continue to be exchanged after Monday, October 7 at any of the Dealer Moogles in the following areas.
Port San d'Oria (I-9) / Port Bastok (L-8) / Port Windurst (F-6) / Chocobo Circuit (H-8)

Read on for details about the Mog Bonanza